5 smoothie ingredients to get rid of the colds naturally

Ugh. We’re all sick. Some bug’s hitched a ride home from school and now we’re all under the weather. My little girl’s the worst; she’s got a raging fever, she’s vomiting, and there’s: “funny sounds in my ears mummy and my eyes hurt”. I’m not so bad, just an itchy nose which makes me sneeze all the time, a runny nose and a pretty icky headache. My oldest girl’s tough as nails – a couple of sneezes, a runny nose, but she insists she’s NOT sick. She hates telling people she’s sick which is kind of adorable and sad at the same time.

Any way, smoothies to the rescue (as always!). These are my top 5 add-in ingredients to bust that cold or flu. 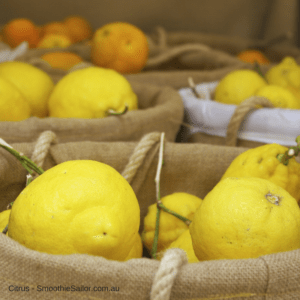 Add the whole fruit, not just the juice. The peel can be bitter, which is not popular with kids generally, so peel it if the smoothie is for them, but leave the peel on for you. Just toss the whole thing (or half of it) in the blender, but without the seeds. If this is too much, at least add some off the peel, or rind, by grating some into your smoothie.

Make sure you wash the lemon well before using the rind, and try and buy organic where possible. Although lemons aren’t on the EWG ‘dirty dozen’ list, it pays to be mindful about chemicals used in growing and packaging your fruits and vegetables.  As Sonya Lunder (senior analyst at EWG (Environmental Working Group) and lead author of the Shopper’s Guide to Pesticides in Produce states in an interview for the Huffington Post:

“The most contaminated sample of strawberries had 20 different pesticides. Spinach samples had an average of twice as much pesticide residue by weight than any other crop.”

Use Enviroclean Fruit & Vegetable wash if you want something more substantial than water. Enviroclean fruit & veg wash gets rid of soiling, manures, fertlisers, waxes, herbicides and pesticides from the surface of your fruit and vegetables, using a mix of water, plant based surfactants, vegetable glycerin and potassium salts. Or plain old salt!

Most of the contamination is on the skin of your fruits and veg, so peeling makes sense in a way, but you’re missing out on a tonne of nutrient and fibre. When you eat the lemon with the skin you’re getting a whole lot more bang for your buck; 3x the iron, double the vit B’s, double the vit C’s and 2.5x the protein! Lemon with the peel sets off an alkaline reaction in the body, versus an acidic reaction for juice alone. Colds produce lots of acidic mucus, and eating the lemon with the peel, with its alkalizing action, is an excellent way to fight acidity.

Citrus fruits also have astringent properties; they will help contract all those mucousy areas so it’s easier to breathe, and they will will help loosen the mucous so you can ‘expel’ it. A nice word for blowing your nose, like, 40 times a day. 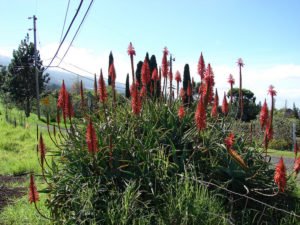 Aloe vera is the most commonly used medicinal form of Aloe, but there’s actually a more potent form of Aloe – Aloe arborescens, the Candelabra Aloe. It looks quite different to Aloe vera, with a more tree-like habit (although it only grows 1-2m tall), and slightly curling, very spikey leaves.

If you can’t get hold of Aloe arborescens, use Aloe vera; An Aloe is better than no Aloe. I have a big patch of Aloe arborescens in my garden and use this exclusively for everything – colds, cuts, burns; the stuff’s amazing. Also note that true Aloe vera has yellow flowers, not orange. Again, an Aloe is better than no Aloe, but try and get the yellow-flowering plants.

Aloe can be very bitter if you just peel the outer skin off and add the inner parts. If this bothers you, cut the Aloe leaves and leave them to drain for half an hour or so. If you drain them on paper towel you’ll see a yellow residue draining out – this is the bitter juice. Draining them makes a huge difference to the taste – the gel itself is quite mild and easy to drink. Isabell Shipard (see below) has a great, although horrible tasting, Candelabra Tonic listed in her book ‘How can I use herbs in my daily life?’. It combines candelabra Aloe with honey and brandy (I used rum as I didn’t have brandy) – it may be the power of my imagination, but when I’m feeling really ill (ill enough to stomach the taste of this tonic) this tonic is a miracle pick-me-up and has, on many occasions, lifted a cold overnight.

Aloe has some amazing, natural properties including, but not limited to (as listing its good properties would take a book, not an article) boosting your immune system and your digestion. Aloe contains amino acids, fatty acids and enzymes which are a powerhouse in breaking down complex foods. It contains antiseptic properties which help eliminate infection. Aloe assists in reducing pain and relieves allergy and inflammation. My favourite book on herbs is written by Isabell Shipard: ‘How can I use herbs in my daily life?’. It’s available from the Herbs are Special website. 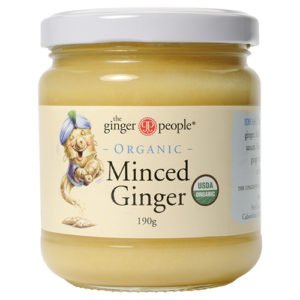 Ginger is awesome for tummies. Mine is always upset when I have a cold, and I generally feel nauseous and light-headed too. Ginger warms the body, which increases blood supply and stimulates the body in expelling offensive invaders as fast as it can. Into the bowel and out the other hole, hooray! Gingers warming acting increases perspiration and circulation, which helps you get rid of bugs faster.

I grow ginger in the garden, Queensland has the perfect climate for growing ginger (Zingiber officinale as well as other Ginger varieties), but I admit to using minced ginger from the fridge most of the time. It’s so easy to grab a teaspoon from the jar, which is already peeled, clean, minced and ready to go. I do only buy organic minced ginger – the Ginger People make an awesome one – see image. Click on it to see it at Shop Naturally. 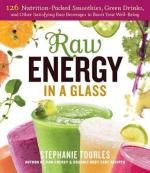 Yeah, I know. Garlic and smoothies should not really be mentioned in the same sentence. What could possibly go well with garlic? Strawberries? Lemon? Nah, it doesn’t go with anything for a nice sweet smoothie, BUT it is a powerhouse for flu flighting (both antiviral and antibacterial), so let’s bite the bullet and chuck in a couple of cloves (without skin).

Stephanie Tourles has a smoothie called ‘Garlicky Green Giant – Cold and Flu Remedy’ listed in her book ‘Raw Energy in a Glass‘. 3 cloves of garlic are mixed with water, spinach, cucumber and a pinch or sea salt. She recommends you drink it once a day, but be careful of any tummy symptoms as garlic is pungent and can cause sensitive stomachs. 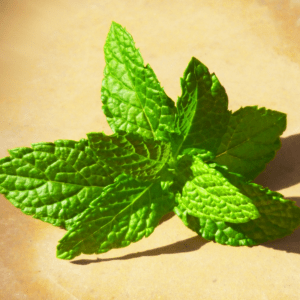 Oh Humble Mint, How I Love Thee! I’m including Mint because it’s awesome, it’s widely grown in many gardens and if you’re not growing it, it’s easy to buy. Mint also lifts and mellows the flavour of other, possibly less nice-tasting, ingredients in your smoothie. And, since we’re including garlic in our smoothie (yes, we really are doing that), it helps counter garlic breath. Unless you live in the bush where I can avoid people for weeks on end if I want to, Mint is kind of a must with garlic.

Mint helps counter pains you feel while ill, as it increases blood flow. It has antiseptic and antioxidant properties – strongest in peppermint and other strong mints. It clears the sinuses – just a sniff helps, and it’s even better when blended or when making a hot face steamer – just heat water, pour into a bowl, add mint with some drops of tea tree or eucalyptus oil, hang your face above it covered with a tea towel and breathe deeply until there’s no steam left.